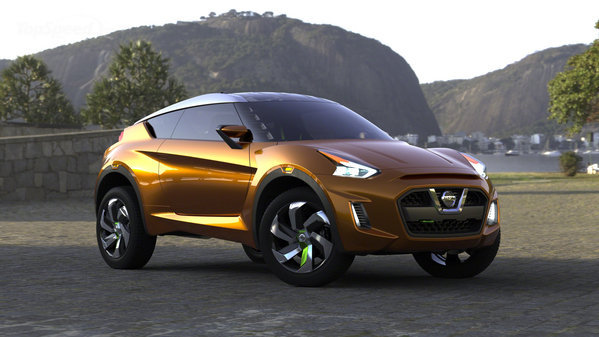 After releasing a teaser image of a sports car concept that featured subtle hints of the 370Z and the GT-R, Nissan has finally announced the Extrem Concept at the Sao Paulo Motor Show in Brazil. Given the rapid development of the Brazilian economy and to underscore Nissan’s commitment to Brazil, the all-Brazilian Extrem Concept was seen fit to be unveiled there.

The Extrem Concept is roughly based on the Micra hatch and is designed to look like a cross between an SUV and a coupe, or in other words, a crossover. This particular segment has witnessed rapid growth with the likes of the Range Rover Evoque fueling that growth. Designed by Nissan’s design studio in San Diego, the inspiration for this design comes from Brazil itself where the designers spent most of their time designing and developing the clay models. The usual concept elements include the wraparound glass, floating roof rails, and detached C pillars that enhance the feeling of an open, airy cabin. It would be great if these elements made it to the production version too. Though the pictures suggest less cabin space for storage, Nissan claims that there is a dedicated luggage space in the rear. A clever two-tier system provides secure storage, where items can be hidden from prying eyes beneath an exposed and removable cargo bin which is accessed via the rear hatch. The bin is designed for day-to-day items and fits neatly underneath a structural cross brace that adds extra stiffness to the shell and accentuates the sporting nature of the car.

It sort of looks like a high riding 2+2 version of the GT-R, but don’t expect it to be powerful like the GT-R, though we have seen one example of that! Nissan could theoretically fit the 1.6-liter turbocharged direct-injection inline-four that also powers the unusual DeltaWing racecar, driving either the front wheels or all four through a Continuously Variable Transmission, a favorite addition of Nissan.