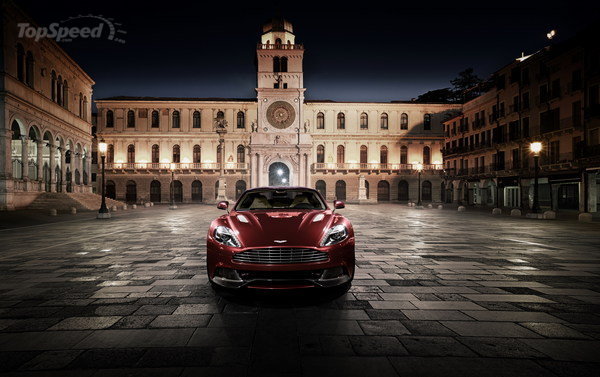 Here we go, folks. The 2012 model year was the last for the current Aston Martin DBS, but Aston Martin fans will be kept busy with the 2013 DBS Ultimate, which is little more than a slightly upgraded version of the Carbon Black model, but a limited edition nonetheless. Once the novelty of that model wears out, the newly redesigned Vanquish will be here and ready to soak up the spotlight. In the past few months, we have seen plenty of spy shots of the new supercar, but Aston Martin has finally decided it was time to offer full details on the new Vanquish. As you probably know, the new DBS successor not only received a completely new design, but it also revived a legendary name: Vanquish.

The reasoning behind the name choice was explained by Aston Martin Chief Executive Officer, Dr Ulrich Bez, himself: “Today’s Vanquish is the ultimate expression of Aston Martin design ethos, engineering innovation and technical ability. It offers luxurious, continent-crossing capability and pure driving excitement without compromise. Bearing the same name as the iconic original Vanquish that did so much to cement Aston Martin’s reputation as a maker of great GT cars in the modern era, I believe the car unveiled today once again puts this great British brand at the top of its class.”

Did the British brand overshoot, or did it just find a way to catapult sales? Hit the jump to read more about the new Aston Martin Vanquish and decide for yourself.

UPDATE 06/22/2012: Aston Martin has finally released the online configurator for its much-anticipated sports car, the Vanquish, which is a true sign that the wait is finally over. The first thing that absolutely will blow your mind is the “Paint Colour” section, as there are 32 different colors to choose from. The palate you have to choose from is so full of varying colors that it looks like the paint card displayed in the paint department at Home Depot.

In addition to the paint colors, you get seven different rim styles to choose from and even five brake caliper colors. That’s just about as custom as you can get in a mass-produced car.

On the bottom of the configurator, you get a little wheel that allows you to rotate the car to get a good look at all sides of it. Our only complaint about that feature is that it is not very smooth and sometimes it has a mind of its own. There are far better ones out there that move the car more accurately and smoothly.

UPDATE 09/11/2012: Aston Martin has unveiled a new set of images, as well as a very cool video for their latest Vanquish supercar. Enjoy!