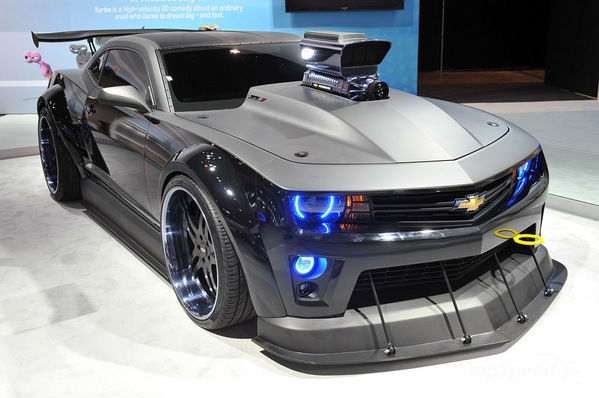 When we thought we had seen it all, Chevy unveiled a rather strange Camaro Coupe at the 2013 Chicago Auto Show in order to promote DreamWorks’ new “Turbo” movie, which is set to arrive on July 19, 2013.

Since “Turbo” will be an animated movie, the new Camaro Turbo has been designed accordingly. It gets lower rockers and fender flares, a front splitter and rear diffuser and a GT concept rear wing spoiler. The concept is painted black with a vinyl chrome wrap, but there are numerous multicolor LED light insertions on the front and rear for an intriguing halo effect. The concept sits on a set of huge wheels, sized 24-inches by 10-inches up front and 24-inches by 15-inches on the rear.

Under the hood, the V-8 engine has been tricked to deliver a monstrous 700 horsepower, thanks to the addition of a supercharger system and a new exhaust system with five-inch-diameter pipes.

Hit the jump to watch the “Turbo” trailer.