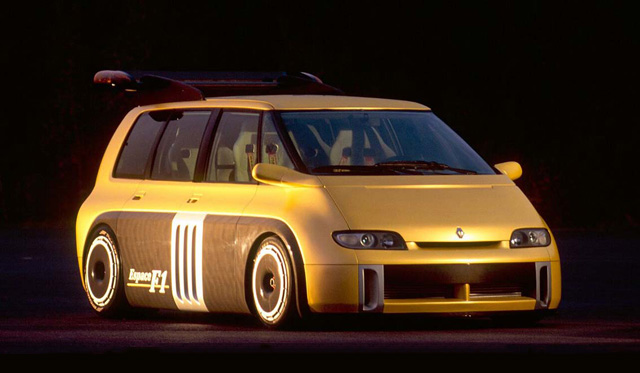 Once in a while people in the automotive industry team up to create something truly remarkable. A great example is the Renault Espace F1, an unique combination of a normally boring minivan full with exciting Formula One technology and power.

The first generation of the Renault Espace was launched in 1984. But the car wasn’t an instant success as only nine units were sold in the first month after launch. It took some time, but eventually the minivan manufactured by Mantra for Renault became quite popular. Ten years later, the French carmaker wanted to celebrate the 10th anniversary of the Espace and its collaboration with Matra in a spectacular fashion, so it turned to its racing department.

During those days Renault had emerged as a successful supplier of engines in Formula One. Nigel Mansell became world champion with the Renault powered Williams FW14 in 1992. The following year Alain Prost won the title in the Williams-Renault FW15C arguably the most technologically sophisticated F1 car of all time due to its electronic driver-aids. The Frenchman dominated the season by starting from 13 pole positions and winning seven races.

The successes in racing provided an excellent opportunity to spice up the jubilee of the Renault Espace. At the Paris Motor Show in 1994 Renault unveiled the Espace F1, de facto a Formula One car with the appearance of a minivan. The body and chassis were made from carbon fiber, which resulted in a low weight of 1,300kg. The Espace F1 featured bucket racing seats with full race harnesses which offered place for four people.

The 3.5-liter V10 which propelled Prost to his world title was the beating heart of the car. But where Prost had 700 horsepower at his disposal, the engine of the ber-minivan featured an additional 100 horses. The power of the upgraded V10 positioned between the two rear seats was transferred to the rear wheels via a 6-speed semi-automatic gearbox, which was also derived from the Williams FW15C.

The Espace F1 was capable of F1-like performance figures. The car had a top speed of 312km/h, a sprint from standstill to 100km/h was done in 2.8 seconds while it took only 6.9 seconds to hit the 200km/h mark. Perhaps even more impressive was its stopping power. It takes less than 600 meters to get from 0 to 270km/h and back to a complete standstill. As you might have guessed, the carbon ceramic brakes were also taken from the Williams F1 car.

Eventually two units of the Espace F1 were built. The first one only made a brief appearance at Paul Ricard in southern France, where it rounded the track a few times before it was stored in the Renault heritage collection in Flins-sur-Seine, just west of Paris. The other was used for giving demonstration runs and shows, but is nowadays on display in the Matra Museum in Romorantin, central France.

This entry was posted on January 23, 2013 by icarzone. It was filed under Renault Espace F1 and was tagged with Car, historic cars, matra, renault, renault espace f1, supercar videos, williams.